Chess has evolved over time. But over the last 500 years, changes to the overall structure and the rules of the game have been few and far-between, limited in their scope, and sometimes so subtle that they are barely perceptible to the average player.

Perhaps the most visible way in which the game has evolved, revolves around the sheer diversity in chess set design and craftsmanship – from primitive to futuristic, thematic to abstract, ornate to minimalist. Some with unique design features and motifs indigenous to specific regions, others approaching a ‘global design standard.’

For hundreds of generations, the most gifted of global designers and artisans have been intent on creating masterpieces of chessmen design whose appeal transcend the dimensions of space and time.

Today, we at Royal Chess Mall – as global leaders in the chess supplies business – offer chess enthusiasts from around the world, the chance to own exquisitely hand-crafted reproductions of some of these masterpieces – housed within our collection of luxury chess pieces. Here’s a sneak preview of some of the gems of the collection:

As strikingly elegant as they appear, the Hastings Staunton chessmen largely conform to the typical design grammar of the Staunton lineage. The conspicuous exception is highly distinctive and masterfully designed knights, which – as is the case with most chess sets – are the indisputable showstoppers.

Modelled after the thoroughbred American Racehorse - Hastings, from which the set derives its name, these knights are painstakingly hand-carved by our master craftsmen in Ebony-Boxwood or Bud Rosewood-Boxwood combinations, and are widely considered to be among the most exquisite chessmen in circulation today.

The gladiator who against all odds, led the history-defining uprising against the Roman empire is the inspiration behind, and lends his name to, the Spartacus series of chessmen. With subtly curved, beautifully proportioned shanks, these chessmen are loosely based on the Staunton blueprint with some notable departures:

Most major pieces have a distinctive three-ringed collar. The king’s crown is topped by a tear-drop shaped finial, a clear departure from the standard Pattee – a key characteristic of most Staunton kings. The bishop’s miter too bears a distinctive, sharply-tapering form, while the turret of the rook has unusually deep crenellations.

But once again, it is the unique-looking, intricately-detailed, highly-expressive and extravagantly-maned knights which are the cynosure of all eyes amongst all Spartacus chessmen. This superbly handcrafted set is available in the Ebony-Boxwood and Bud Rosewood-Boxwood combinations.

Named after the famous war charger of Napoleon Bonaparte, this delectable masterpiece of design and craftsmanship features uniquely multi-tiered shanks and collars, while maintaining the basic structural integrity with the Staunton line of chessmen.

Predictably, the piece de resistance of the set is the knight, with its wildly extravagant mane rippling in the breeze. Each magnificent piece in the historic Marengo set is meticulously hand-carved by our master craftsman and available to you in the Ebony-Boxwood and Bud Rosewood-Boxwood combinations. The New English luxury chessmen are intricately hand-carved entirely out of camel bone by the master artisans at Royal Chess Mall. The set is modeled on a distinctive pre-Staunton design, characterized by unusually slender, segmented and multi-ringed shanks and collars and the rather grand and ornate finials atop the royal couple.

The New English series are among those rare chess sets where, aesthetically, the king trumps the knight to occupy center-stage. The New English hand-carved camel-bone chess set is available in two striking color schemes Crimson-and-White and Black-and-White.

Grazing Horse chess set is a strikingly unorthodox yet stunningly exquisite piece of craftsmanship. The uniquely spiraling shanks and intricately adorned finials makes this set one of the show-stoppers of the luxury range at Royal Chess Mall.

As impressive a figure that each of the Grazing Horse chessmen cuts, it is (as you might expect), the knight that steals the limelight (but not quite the way that might have expected it). This knight is truly a knight with a difference, for it is, quite astonishingly, depicted as nothing more than a grazing horse’s head - with its snout attached to the base.

The Grazing Horse chess set comes beautifully finished in the lacquered Ebony-Boxwood or lacquered Bud Rosewood-Boxwood combinations. One look should suffice to convince you that this set could occupy pride of place, wherever you may choose to display it (assuming of course that you purchase it)!

Get a detailed view of these and over 75 other luxury chess sets here. Happy hunting! 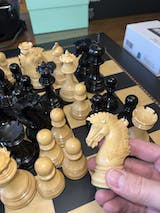